Why Pathways? What is the difference? Paul White images 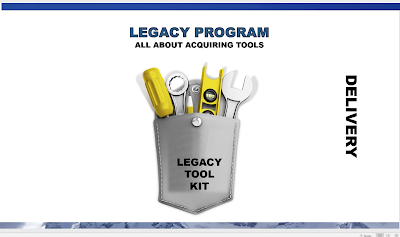 Paul White, Distinguished Toastmaster and Chief Ambassador of District 27 in Virginia, is also a great storyteller and illustrator.

Speaking on the difference between Toastmasters Legacy program, the one that many still uses today, and the new Pathways Education, he shows this two images first and tells:

"In the legacy program we acquire tools, learn about organisation, vocal variety, and get many other tools to work with for speaking better. 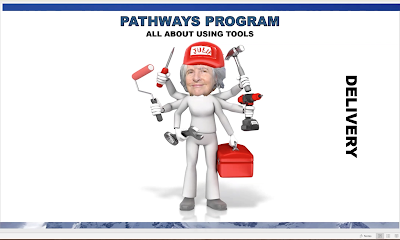 The new Pathways program is about Using Tools we acquire on the way. It does take us to another level.

Using tools in many different occasions is a lot better.

What a difference between having tools and learning how to use them!

Of course, that is not the only thing that is different, aside from the one is based on information that we find through internet, "Base camp" as we go level by level in our path. It is lot more customized to our needs.

What? did he really put my head in that picture? Haha! Now I can dream myself back in that body, many many years ago. 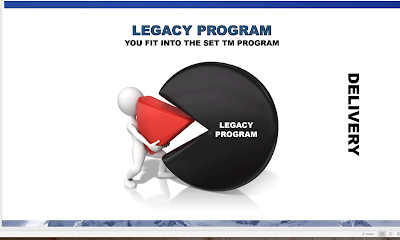 Before, we did have to fit in the program, and we learned to do so. After all, some of us, but only 1% learned and got to become Distinguished Toastmasters. And only 10% arrived even to finish their 10 first speeches and become Competent Communicators as it is called.

That is of course also from Paul as all the other drawings used in this post.

In the modernised Pathways education program, we can chose many path to begin with and go in many different directions, depending on us and our needs. 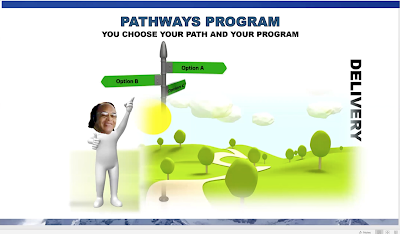 That this time is Paul who does enjoy choosing his Path, his first path was Presentation Mastery, and at the end of the Path, not only he had become Presentation Mastery Proficient, but indeed he begun to give Professional Speeches, sometimes more then an hour, in and around Washington DC!

After I finished my Visionary Communication Path, not only I opened this blog, now almost 20 000 visits, but also begun offering Panels about different subjects. First about Zoom, that I did not know well at the time, then about Pathways as Panelist and also as Panel Moderator. I also continued to make Pathways more known everywhere I went and in any social media I could, which was my vision in that path: help the Transition.

In Pathways, the Essence of Toastmasters and Ralph Smedely's was retained, here is another image. 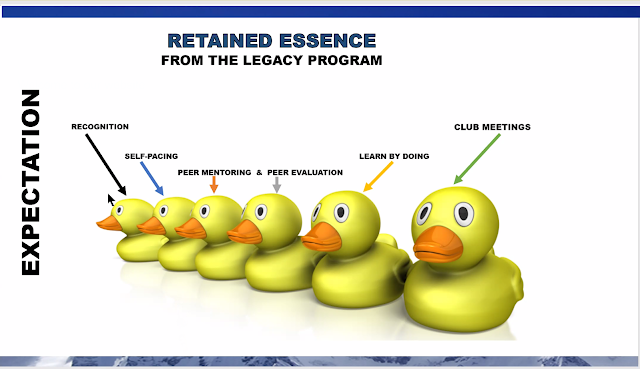 The club meetings do not change. We learn by doing. Based and helped by peer evaluation and mentoring, it is self-paced and self-evaluation without "pass/fail" and recognitions (coming faster.

But in plus, we have with pathways all that you can see bellow. 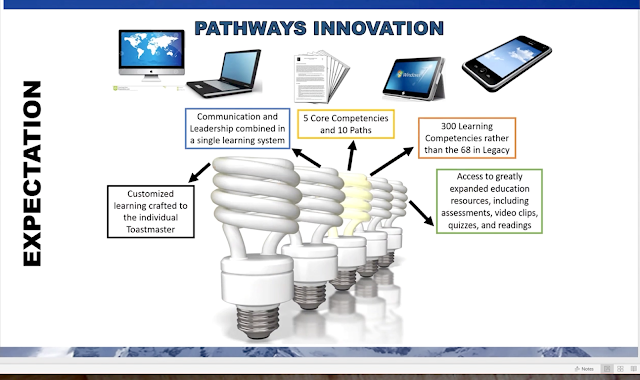 While we were presenting a Panel about Pathways with Paul online to audience from New Zealand, he showed us all what it does brings us, using different devices. How many different "competencies" we can chose from and yes, all the different resources including video clips we can find in our Projects. 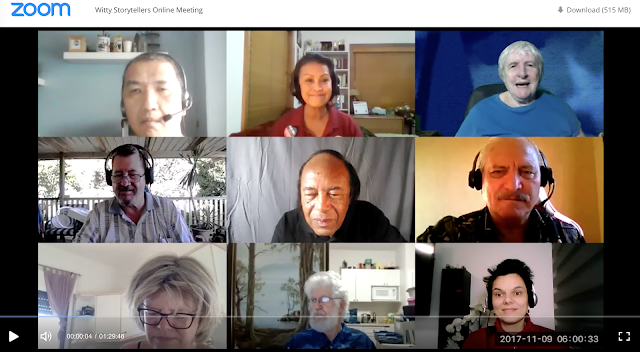 Paul in this image, in the middle (second row second) listening to me, upper right in blue, giving feedback to his story he just told us in our online club. Listening from Vancouver, from Berlin, from Australia and New Zealand, from Manila and Oregon and London: we ARE there all at same time!

Paul White used the Connecting with Audience project, elective in level 3. It also was an example for me that even when we do chose the same path or same project, we can interpret it in so many ways! About that, another post with more details.
Posted by Julie Kertesz - me - moi - jk at 07:43

OUTSTANDING summary of changes, progression, adventure (sorry for yelling, but I am enthusiastic).

Thanks Dave, Lynda, Chew, for leaving a comment. The rest, is all due to Paul White.

Julie. Pathways gave the two of us the opportunity to collaborate, cooperate, even conspire together at times. Although we were separated by mountains, valleys, rivers and oceans we managed to walk and explore pathways together, each in our own way based on our own experience and interest. We led and we followed. Sometimes we walked, sometimes we ran. We stumbled a fewftimes but kept going forward side-by-side. We lersned from one another. We inspired one another to explore more, to climb higher, or on occasion, to just pause to enjoy the change in climate and scenery. What a pleasure it was to explore a complete path with you, Julie Kertesz.