Roads and Paths, all interesting 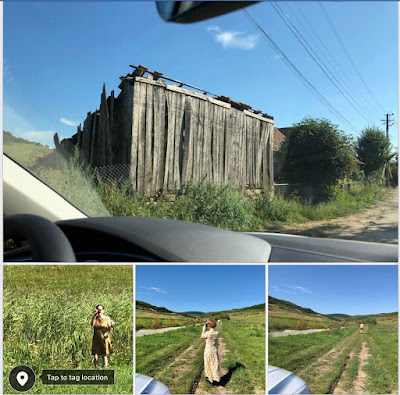 Far away, to Dracula country, and even if he never existed, that is how many "know" about Transylvania.

For me, born in Cluj or in Hungarian Kolozsvàr, the biggest town in Transylvania, with university started around 1100, and in winter, the number of people growing with 1/3 with the students still arriving from many towns and villages around, it was a good surprise: the center town did not change.

We only were bumper to bumper sometimes, so many cars are now circulating and going somewhere.

Then my family decided to go also "out in the country" and we went to a village 25 km out of city. More, at the end of the village my son, the driver, found a narrow road with pebble, just enough for a car. What happens when a tractor comes toward you on that road? there are some parallel dirt road, and that is where we stopped for a while.

There is always another path. A different path. With creativity one can enjoy it, have fun, do something different. 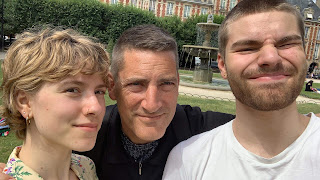 My son here, with his two children, went morning and evening in the hotel's swimming pool. In day we toured the city, and I could transmit, showing the places I was raised, and my mother raised.

At the last days, besides having dinner with many from the same family tree, the "young" one's went to the main square, seen Hungarian folk dancing, then went to a Rock concert on another square. While I was already resting.

Writing a blog, meeting online is most restful then going around to tour. I was away, from TEN days from this blog, will begin to write again. News from the convention will also come. There are already some, I just have to undersand exactly what, and take time to experience some. 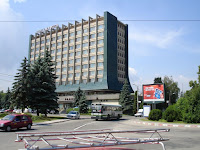 The hotel I stayed the first days, was near where I used to live. At "my time" there was nothing there but a basement, for a hospital never build.

Cluj (Romania) become Kolozsvàr (Hungary) then back to Cluj again while I lived there. Same city, different country! Many things changed, between other the names of the streets, while we lived our lives the same way, or almost the same.
Posted by Julie Kertesz - me - moi - jk at 07:33