We only have two choices, Choose Forward! 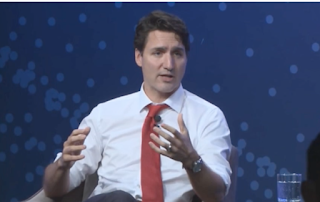 I could not say it better! Justin Trudeau said it here so clearly. "We only have two choices" 1 minute. Listen, I will not write it out, he does say it so well!

What Justin Trudeau said about Artificial Intelligence and Automation coming, can be said also for us, Toastmasters about the Pathways Education System arriving and our response to it. What we want to do "try to resist it, or lead and shape it?"

Published first January 2018, it is back again as it pertains even better. Plus, celebrate his win.


I heard the same explained by him longer and deeper, but that short video already could make us stop and think. Do we want to be leaders? Leading and shaping the change?

Recorded with Replay Video Capture software, that I acquired when we still used GoToMeeting, now used to capture short snippets from youtube or video conferences. Zoom does not need it any more, as it has its own video recording incorporated even in the free version. I went, not so easy, I have to admit to Zoom now, and could not go back, would not want to go back, but change was not easy at the first. And now, more I use Zoom more I realize all I can do with it. Indeed, it is worthwhile to embrace change, lead it.

While at the beginning, when I hold my first Panel Moderating, I almost did not know why we change to zoom and what we can do with it, soon, after a few month using it, I will be able to show many others some important things we can do with Zoom.
Posted by Julie Kertesz - me - moi - jk at 15:00

Perfect video
Leaders are made by doing what the rest are not prepared to do.
Keep up the great inspirational blog
Vic