Ask our leaders: Level 1 achieved in which Path?

All leader have to prove they walk the walk not only talk the talk! 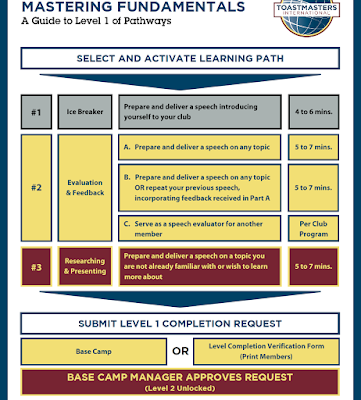 Can we make a New Year 2019 resolution for others? Together, we can go faster! Better! Ask around!

And here, again, are the Level 1 projects, so no one can say "I did not know that I had to give two speech and a feedback in project 2 (which could be done as three also). Yes, Evaluation and Feedback has THREE Tasks!

In fact, the other projects also have more then one TASK but only one speech follows them.

In Icebreaker, we have to use and outline, have a goal, rehearse and rehearse and at the end, give an authentic story about ourselves or our passion. Make us known but audience.

In the Research and Presenting, search discover better a subject relatively new to us and that interest us. Learn a lot about it. Find someone to interview. Read about it. Then, decide how we can shortly and clearly present the most important part we learned.

"Do I have to give in Evaluation and Feedback the speeches in that order?" Yes! It does help all of us understand the importance of a SPECIFIC feedback that can be applied. The project also make us realize that listening is not so easy, and take the evaluations as they arrive, take out of them what we need, and repeat speeches and stories to improve.

What else we learn during the Level 1 projects? Login, logout of the Basecamp. Advance and read the projects. Not only Print but Save our Projects. Where to find the Evaluations forms called "resource". How to say "I finished this project" to the Base camp (as it is now). How to tell Base Camp "I finished all my projects" please tell the Base Camp managers and let me go to the next level. And of course, ask one of committee member then to declare the Award at Club Central of TMI site so we do get the award declared.

We can learn more, but those are the minimum, and those minimum, all our Leaders should know and be able to tell others. The Base Camp may change some, it will not change from one day to the other. The Projects will remain as they are. Do not let anyone else "wait" and see. We are no more, after two years from the first Pilot at the waiting stage! Go for it and nudge all around you to do the same.

Do not ask "Proficient in what?" just "Achieved Level One in what Path?" True, any Member can go at their own pace, but a Leader has to lead and not remain behind. Give example and understand what is asking from others.
Posted by Julie Kertesz - me - moi - jk at 10:10

Perhaps my district is unique (and my district is losing clubs and members at an alarming rate), but most of the club offices including president are filled with people who were willing to take the role because no one else would. If you told them to start walking the walk, they'd probably walk away from Toastmasters.

Dear Retha, my iPad just shown me that you are the “unknow” : perhaps next time you could sign your comment?

Try them! See if instead of running they would not delight to discover something new; and if not them it can be the VPE the Area Director and so on but if there is only one in a club who begun to discover better Basecamp then name her or him Secretary or Pathways Champion

It's a while since I was a member of Toastmasters but 'Unknown' is essentially right in the assertion that club management is usually undertaken by those willing to take on the roles, rather than those with any proven ability to do so.

In my day, any leadership training was basically achieved by the time-honoured method of 'throwing in at the deep end'.

As for 'bog standard' committee members, those were usually appointed from members who couldn't get to the door fast enough.

Some took the roles seriously and some were there just there for 'the points'.

In the established London clubs, there was a kind-of quality control insofar as it was customary, subject to election, to appoint a President who had previously undertaken the role of organising the programme.


Education Vice-President, as it was then called, is probably the most-crucial role in the club.

Of course, the role of 'front person' is very popular but roles involving hard work much less so.

With new clubs, those who decided to start the club pretty-much appointed themselves to the senior roles, whether they had the relevant skills or not.

I suspect that most of the effective Toastmasters leaders possessed those leadership skills before they joined.

It would be interesting to know if the new training structure supports the development of leadership skills but that certainly didn't happen 20 years ago.