I was not born yesterday

I could be believed, and in my Standup Comedy routine now I embrace it and play on it, that an "old lady" not only never swears (I do it only on stage and only in English) and learned them recently. An old woman does not know either about computers, systems and programs. So when I tell about finding hair... on my face, and all that did not work to get rid of it, "I found finally a solution: I photoshopped them out!" everyone laughs. Even if it was the truth. And indeed, "never grew back. On screen". 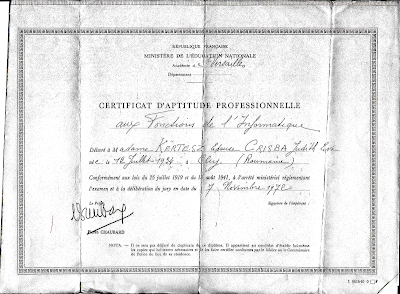 When did I got first into computing, why and how"? The certificate here "CAP Informatique" dates from 1972 when I nailed the state examination. I was as proud of it as I was on my Level 1 in pathways": proved to myself, still can learn.

Why? How did it happen?

We moved to Paris, a year before, and my daughter had to learn "Modern Math" all with 0 and 1. What? At that time, some in French Education System believed, we humans have to learn to speak as the Computers do: with 0 and 1 only!

Tried out a computer school, one year through correspondence, while working as chemist, did teach the programming basics, plus Fortran and Cobol. But we could never touch a computer in those time! Touching a real computer was too expensive! We wrote code only on paper.

I got interested. In 1977 in USA Research Institute of Bethesda, I got to use computers through Terminals installed in our chemical lab. I connected and learned Basic interactive, then took some computer classes "so we can justify our cost" they told us. I also learned to use "word processor" with a letter when we wanted bold, another letter for new line, and so on. Used it to write my boss Bio, and from then on, I could play... And print my first ever page: had to go then to recover that printing.

Back in France in 1980, had to find a new job, change profession. Begun to teach "computers for beginner" : the same way I tell now about Pathways. At night before, all day before, I learned, then I went to the company to "teach" as an expert. One step before them. 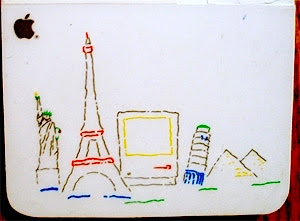 At one company I discovered Apple II ! "Please make an invoice program for us in Applesoft" I will pay you well. "Invoice? Applesoft? Apple II?" never heard of them! But needed the money. If you listened to my Mistaken Identity video, in this blog, it tells the rest of the story.

That is how I, already "old lady",  almost 50 years old, dropped in the Personal Computer Revolution. Here is a badge I got in San Jose, during the first ever Macintosh developers meeting. I was by then, representing Paris, as Distributor of Macintosh related products with my company "BIP Bureau Informatic Personalisée". I chose B not because we were really a "bureau, office" but it come after A of Apple in the expos we showed our products.

From then on, I lived the Personal Computer Revolution from inside. And each time something new come out, sold my old to a client, with added training: that made up the new device price for the company. I met Steve Job, heard him putting down Steve Wozniak, and told him later when he was pushed out from Apple "we will regret and miss you": he was at an Apple Expo Paris that day. I met Microsoft"s Bill Gate, also in a Paris meeting, and asked him a tough question, he did answer it very cleverly! Went to many interesting Expos and found great products to introduce in France.

Then, I was hired to an University in Paris to be... a Plumber. Well, Mrs Mac, go and help out whenever was a problem with one of the 300 Macintosh users. Got to teach them! Trained them in Workshops, so they call me less, and discovered not only internet but the Web, when it begun.

So yes, I am not born yesterday, and I know a some about Photoshop, Word, Excel, Scripting and so on. But it changes so fast! I barely learned of GoToMeeting platform, to hold online meetings, then had to switch to Zoom. Well, I did fall in love with Zoom when I realised: I can use my own pictures as background! And later, I become "specialist" (one step ahead only, remember?) of Zoom's Screen Sharing: this Sunday will deliver a Seminar, online, showing and explaining "how to".

Remember! with all this and with Pathways it is not difficult to be seen as an Expert!
Just be one step ahead of others.
Posted by Julie Kertesz - me - moi - jk at 10:04