50 Toastmasters together from all over the world! 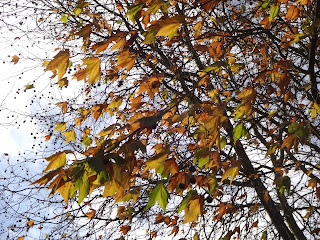 Autumn leaves, strong even in rain and wind. Taken yesterday, on my street. For me, it tells also about our Panel about Pathways we just finished.

From 100 having put their names on "I want to be there" 50 did come and participated and enjoyed!

One hour, a very organised Panel leader with very well chosen five different panelist, an attentive Timekeeper and a Chat monitor. Together, through winds and electricity cuts, here or there, we went one and continued as if nothing happened. Zoom is great for it and from the get go we had co-hosts.

The the first Panelist, Chief Pathways Guide of division 57, the first who went "on" Pathways, showed us slides while he spoke. 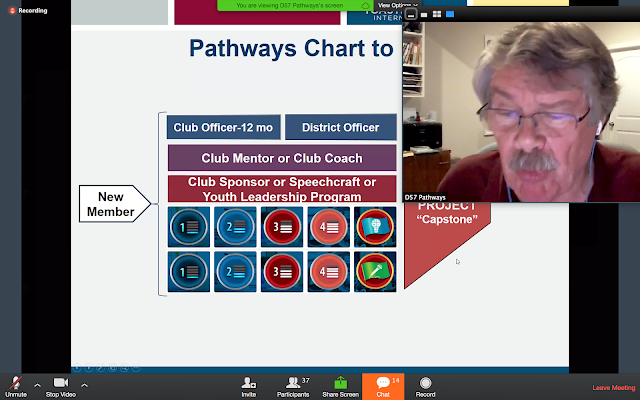 Here is his screen while he continued to speak, about the "way to DTM" in Pathways as he designed it. Very clear. You have to finish two path. I am between those who done this, as George too. Be a club Sponsor. Done that. A club Mentor or Coach: I am now coaching a club with not many members but wonderful ones. Club officer for 12 month : done that. District Officer? I hope I will get the 8 clubs to be Ambassador, necessary, for the moment only 5 clubs in my Area I have been Ambassador for 2 years now, but what counts is from now on.

Downloaded the DTM project and read it twice and begin to determine what useful project I can do. There are now many linked to Pathways Adoption in my club, in my District. So, I have a chance... Still hoping even when the wind blows. 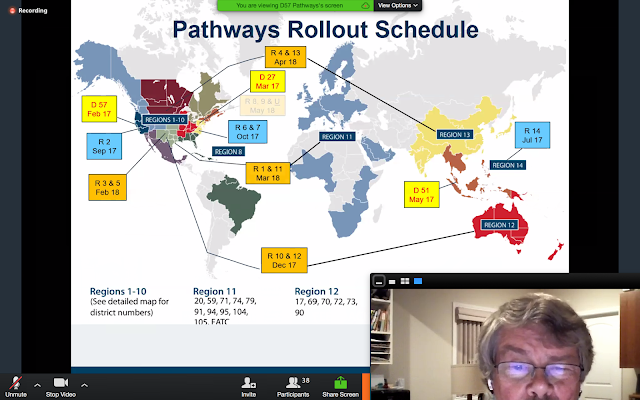 A most interesting slide George showed us, and it was interactive: as he spoke we went from one District to the other, then Region by Region. The rollout, I published it already but so much more can be understood as we see them in a picture! 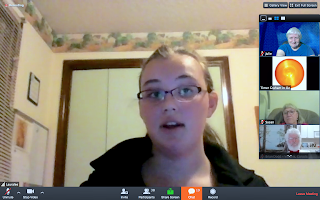 After George Marshal, the second panelist was Lauralee, Pathways Guide from West Coast USA, and VP PR of the most amazing humorous club I have seen in all my years in Toastmaster. That is why I joined Yaquina Toastmasters club, too.

She told us about the Virtual Support she offered and recorded, then posted in the club's great blog: that is how I discovered them. She is also a great blogger and passionate about Pathways.

I was the third panelist, also I think the oldest, and at some time, even managed to bring the audience by sharing my screen into my BaseCamp. Here is only a Facebook picture of me, as I was busy speaking.

It is not how we do when all is calm in our lives, but how we behave and react with the wind blowing around, the rain beginning to make our path slippery and we continue slower but do not stop on our journey. Knowing, one day the wind to stop, the sun shine again.

I spoke "up close and personal" and how one can become "expert" by something we learned just last week: from then on, we can help others. 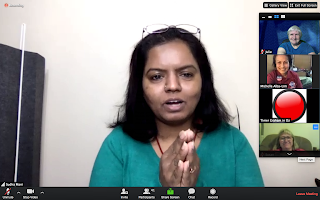 The fourth Panelist was Sudha, she is going on into Pathways, full speed, and very enthusiastic about it. I was so absorbed by her speech that I almost forget the snap this picture: you see the Timer already signals RED: it come too early each time for all of us.

So much to tell! That is how felt also the Listeners, our Audience. At the end telling us "it was wonderful! We need more like this, regular panels." Sudha already told us: I will do the next. 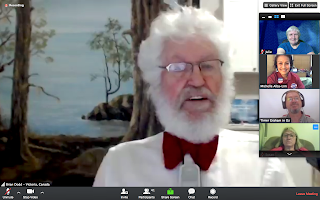 Brian from West Coast Canada was our last Panelist, and told us about his experience, already years before Pathways begun, he was tracking, all he could gather about it.

With Brian, encouraging each other, we went Remote Access to the same D27 club to put finally our hands on Pathways. "Up close". He become the President to that club, in July, introduced Zoom, and studies Base Manager Duties too.

After the first speeches by each Panelists, Michelle, asked each of us two questions she prepared, about Misconceptions "fallacies" we heard, complains that we read, then questions send to her from the Pathways Discussion Forum before the meeting. We finished with questions conveyed by Aaron, chat monitor, and the hour went on so fast! 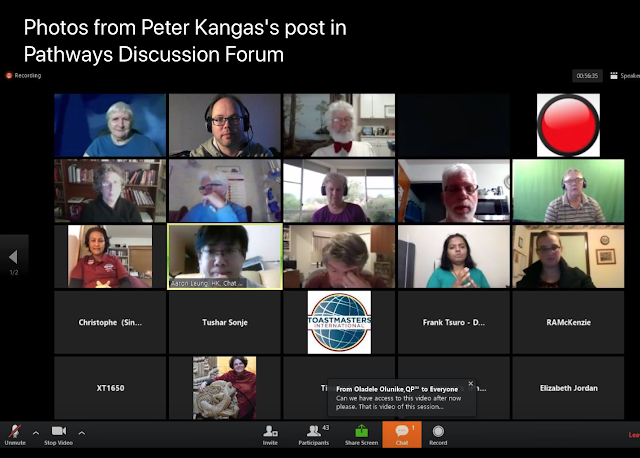 Here is a screen shot "Gallery view" by Peter, it is not the Speaker view : Sudha speaking here again. But we can see many participants to the discussion from all over the world! Some only names, closed their video while looking and listening. And coming to the screen, after the meeting as we asked their opinion. "It was great! Learned a lot! More like this" was unanimous answer.

Indeed, there is need to more information, more answers and discussions. With them, some fear of "new" will dissipate, faster or slower. One confirmation we had: the new who did not know otherwise before, take to Pathways normally and do not have any problems, even speaking "without awards" for some of their first speeches: they just want to learn.

I also encourage everyone that is interested in Pathways to download the Ice Breaker Manual that we will all do in whatever Paths we choose. It gives you a good indication of how they have added to our Toastmaster Experience. If you were not at our meeting today do not miss the next one. I do not remember being in a One Hour meeting that I did not take time to look at a clock, I was totally surprised when Michelle said it was time to end the Meeting. Here is the link to the Ice Breaker https://www.toastmasters.org/websiteApps/Pathways/IceBreaker/tm100101/index.html

Look at the photo… some leaves are still stubbornly green.
Others are in all shades of letting go.
That for me illustrates the whole debate on Pathways.
Some will cling on against all odds.
Others will let go and make space for the new growth season.

I could not joint the discussion as I had my B & Mortar club at the same time. Since my traveling time is around an hour, I left an hour before the discussion started.
However, I had the opportunity to view this talk on video.
Thank you for enabling us to do that.

This blog is a good synopsis of that event. Find it, view it and at least consider the fact that we have Lauralee and all age groups to over 80’s who can learn, do and be.
Be enthused.
Be a mentor.
Be an advocate.

This blog is another avenue to get to Pathways information. So are the many online clubs offering training.

The number of people who took the time to sit in on the online meeting is a clear indication of the need for quality information.

This blog is just another example of Julie’s motto of “go farther, learn more” and grow.

An intriguing discussion is definitely worth comment.
There's no doubt that that you should publish more on this subject matter,
it might not be a taboo subject but usually people don't talk about these issues.
To the next! Many thanks!!