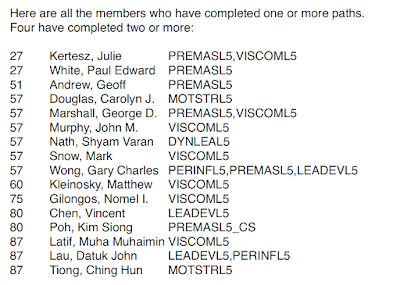 So far, after the Stats, we are not so many who have completed at path, or even two, but that was a few days ago, after it many got their second.

I am not in front because I have done the more of them, but only as I am member of the district with the lowest number: 27.

Of course, at one hand we do continue with other path, learn more, learn different. Look at the next path with other eyes.

But beside the path, now the question arrises "What else we have to do for a Pathways DTM?" 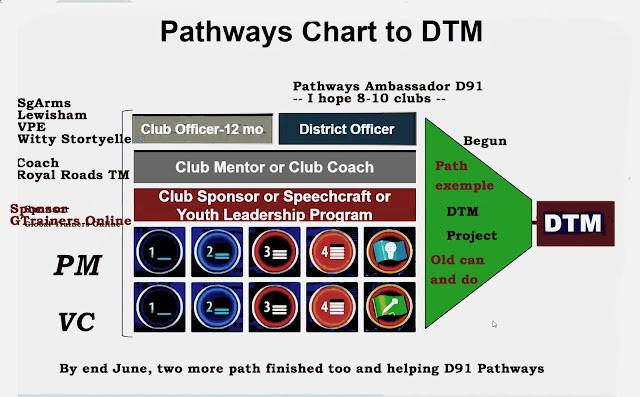 Here is one way to look at it. You can see my two path (that I completed) first the Visionary Communication then the Presentation Mastery. On "top of them" come the Roles we have to assume.

I am Sponsor of the club "Global Trainers Online" helped at their chartering in August, and "play" the SgArm role in that club. I am now an approved Club Coach at Royal Roads TM, which I visited a lot of time, and now help them get more members and get "Distinguished" at least.

Have been Club Officer in clubs. It seems, one can be 12 month or twice Six Month. We will see about that. My two different roles, Secretary and VPE in two different clubs, the year runs out end June, but six month before, I was already VPE already in my online club.

District officer? I will not be a Guide, but as Pathways Ambassador in at least 8 clubs, contacting them monthly, till rollout and three more month at least, I could get that also. It will be a lot of work, but very interesting also to go out with the Guide together and answer questions. Show my enthusiasm, and whenever possible a glimpse to the Base Camp.

I already got the DCP project and begun to think and plan in general, if not yet with detail for it. My different projects that I completed will help as also my experience with DTM last time, in 2013.

I see a very busy five or six month awaiting for me.

And looking forward for two more paths and different slants for each. About that, in next post.
Posted by Julie Kertesz - me - moi - jk at 10:31

Julie, can you enter your officer roles on Pathways. We tried but did not succeed. How did you do it?

Maybe we can Zoom after Christmas?
Thanks