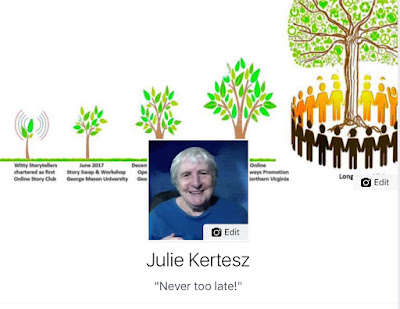 When is a path finished? Well, I can answer this question: after your last Project is completed and delivered.

Well, after the last project there is always still a "Reflect on your path" but let us not count that one, that closes affectively the path for us.

Today, I delivered speech that one to give after the "Lessons Learned" meeting, held after an important meeting that we just finished leading with a team. A very short time is given to speak, after a very long task. And of course, it is asked also to write down the conclusions from what happened so that next time some of the problems could be avoided and get an even better meeting, it will be an ongoing task.

From this picture above, the first tree is missing. It is how my iPad showed the picture Paul White created with a bit of suggestions from me. There is a tree before: he created three storytelling toastmasters clubs around him. Then there is the Witty Storytellers Online club we created with Svetlana. Today, after our meeting, she remembered "indeed, at that time there where yet so few online club, and none speciality like ours." Now? They are more then one for every day of the week.

The small but bigger tree is the Story Swap in June between the three clubs in Virginia, near Washington DC and the bigger one above my head in this picture, the Event we created with Paul, conceived in August, as a goal through two parallel Paths, it happened the 2nd December a Story Swap between onsite and online with 15 storytellers speaking alternatively. The meeting to discuss it was soon after as my project asked for, the 7 December, and today the speech. A bit more then 7:30 minutes, it went away too fast.

Yes, I learned a lot from this Project even if it still confuses me. The evaluation forms speak more of how I lead then on Lessons Learned from the festival we held together with the storytellers from those clubs. We did learn a lot, them and us, all different things. As a team, and each of us too. Even those listening to me speaking about it in too much detail, because it was too near me, were bored, I did not succeed to make the report into a fascinating story. With distance, I will try. Next time.

The other tree, above my head is the meeting that will be held in February and I will organize with a team and many online clubs. This time, with more storytellers from online, inverse then was last. Also longer time given : a good story takes time and absorbs, time seems to fly. It is no more "inside a project" or at least not this project, this path. Inside or outside Toastmasters? Well it will be between online clubs that extend to the globe, and as we hope, it will just set a trend we continue.

Leadership Development will probably be the shortest path for me, but it is the more joyful one! Will I Reflect on the Path till end December or January does not matter: I will take my time and decide where to speak about it. My first story from the path was delivered in Normandy in a garden, the 1 September. Here is a photo of that telling taken by my son, in my Google + profile. 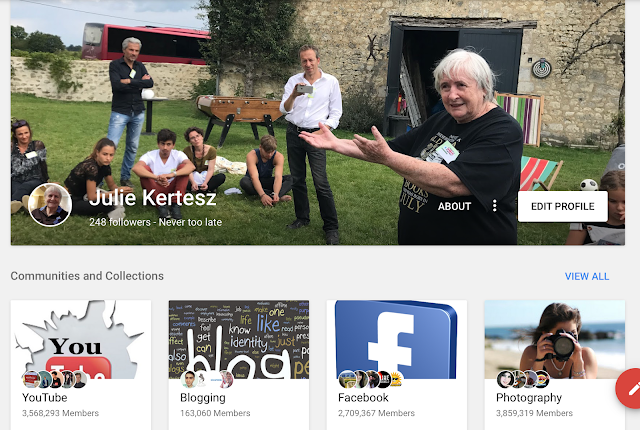 I begun, as Paul telling stories about stories, and then about the importance of the storytelling in our life. That first one was about our Great great mother, here 57 of her descendants were present in that France farm garden. The next "tell any story of any style" from the second project, was about how my father's story about his professional beginning influenced me thirty years later.

During the project, which finally I chose not after the title but the required projects, and it was wonderful for my goal, I did a lot of wonderful things that will tell in another post, or probably you already read about in previous posts. My blog, now not only arrived to over 25000 hits, visits, but more and more tell me ; your blog post helped me, opened my eyes. Today, after the meeting I was asked advice from Olandele in Nigeria, "how can I begin Pathways faster"? Yesterday, Svetlana joined also a Pathways toastmasters club. I am so happy when I can inspire by my experience, stories, advices!

We had a funny and interesting story from Krishn this morning at our online meeting: how not to make New Year Resolutions that fail, and how to make. What to wish and what we desire. After the meeting, as a good host, I asked all who come one after other about their future goals. So diverse!

As to me? I hope to continue my Vision from the Visionary Communication I finished in September and that I never stopped working on it, bring more and more Toastmasters to Pathways, in many different ways. For next year, it will be by preparing my Districts Rollout and making it as successful as I can. At the same time, continuing the Storytelling movement, and as it is in Paul's picture, combining it more and more with the Pathways. Telling Pathways Stories.