As Secretary, I am now one of the Base Camp Managers of my club who launched in Pathways the 20 March. I also have to understand the BCM duties better to be able, as Pathways Ambassador and Pathways Gide to explain it better.

Until now, I did believe that the only interest is Approving Levels. I did that as test with a toastmaster pal that just finished a level, in August, last time I was BCM, in another club. I begun to look at those videos "how to" one by one. Under one Square there are more then one to look to.

I begun with Level Completion. Then this morning with Tracking Progress. I remembered some of the videos I have looked a few days ago only. These are in the Tutorials.

The Tracking Progress is  the second square when you enter Base camp "As Base Camp Manager" and I wanted this time, to see which of our club members enrolled and which path they choose. First, I had to refresh in the options of upper right corner. It does take long. When it come, the name of paths and shorter for only one in it, longer when two, come. Then again upper right corner to ask more information. 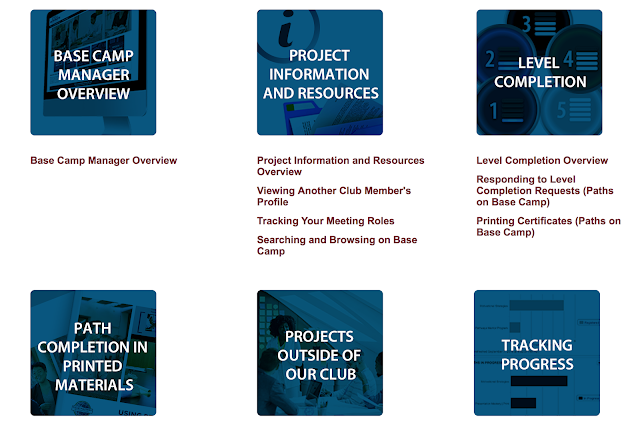 Here I was! Now, I know who choose what path, who already on it, and each what path they choose. From the last time I looked, not long ago, another member yet has chosen his path. For so far, declared them, even if two others gave their Icebreaker before the launch but they did not yet get in. So in fact, we are already six "on" and it will grow.

So indeed, I have to recognise, that even when I do not understand immediately “why do we need this?” with time, it comes and I realise it can be very useful. Even when we meet face to face in a room, no one can know, till we hear them speak from their projects, and even then the path name is very fast mentioned.

My Broadband is down, for a few days I can use my IPhone hotspot, it works. But very slow. And still a lot to understand. It works a lot better on iPad then on Macintosh laptop. So I could not even transfer the screen dumps from there to here. In the morning, could access to my Base Camp as manager, create screens to show in this blog. But suddenly when opened the blogspot, it told me “no web connection”. PS A few hours later, when iPhone is far away in another room and no more connected to this Mac, suddenly the Broadband works! I could open the post and add screens.

This one is already published, only for those who did not seen it. Helps decide fast a new path.

Thank you! One thing that bothered me as a guide was being unable to try out the BCM functions. Lucky for me, no one has asked me for help.

Thank you for this blog, Julie! Because of your blog, I am beginning to feel more eager to start in PATHWAYS.

One thing I would like to know is how comfortable members have to be with using a computer. And what specific computer skills that members need to have in order to be comfortable with PATHWAYS. I understand that members can download some parts of Pathways. And yet there are people who do not want to feel that they are different than others.

Thank you again for all you do to get so many of us ready for PATHWAYS!

Thanks Lee and Thanks Susan for your comments!