Yesterday, we went to my London Base club, which I joined before it’s chartering, in January 2009, meeting Philip, in the photo on the second row, and he inviting me to it, when I told him I am looking for a Toastmasters club. I was everything - almost - in this club. 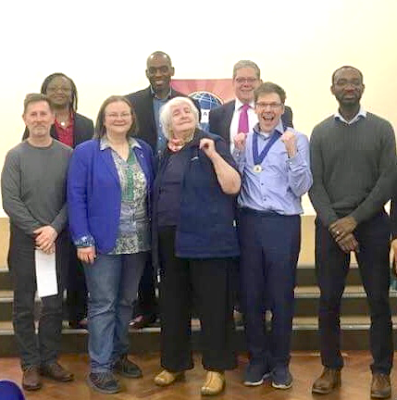 VPM then VPe before the year went out as the VPE got I’ll in March nd I took over the job. Then President. Later AG but I always considered it « my club ». Now, from last July, I am Secretary as I knew that when Pathways will arrive to us, they will need my help.

In this pic, are just a few of us who played a role in the meeting. With Christina Onofrei, Pathways Ambassador and Guide from Romania, who showed me how a short wonderful Guide//Ambassador speech should be done.

Near me Richard our President, who now opens speaking how much Pathways will bring us, and near him Donovan who gave a fabulous Pathways Icebreaker from his Motivational Strategies path, he choose a week ago.