I will of course buy it, as soon as it arrives, at the end of year or perhaps even earlier? It seems they begun to work on a Humor or "humour" path at the beginning of this year already.

Making laugh is a SKILL something that can be learned: I can testify for it! So do not wait, till it comes! Any speech - almost - can be given in "any style" and humorous is one of it! Making laugh was one of the biggest features, besides the usual personal stories, in this year contest.

I was convinced for almost all my life "I can not do humour, I have no funny bones" Even if I made laugh once, as I read a story I wrote and rewrote, the audience and the atmosphere, the lightening even, had most to do with it that my story that was supposed to be not funny at all. It gave a message through a moment of my life. I will never forget that moment, when my phrase about my aunt was interrupted with a huge laughter. "She was lucky, she lost her husband" What? "at 68 and two year later, a very nice 80 year old man fall for her". They did laugh and laugh at the beginning so much, I could barely finish my phrase and go farther to speak how the old gentleman and my aunt, opened the door and beside a great dinner he cooked for us, he gave me an advice I needed and could never forget.

Almost ten year later that laughter, and many others that followed that evening, I got many laughs during a very serious story again, this time in a London theatre. That is when I decided, I have to learn how to make audience laugh WHEN I want, not by chance. I was almost 77. 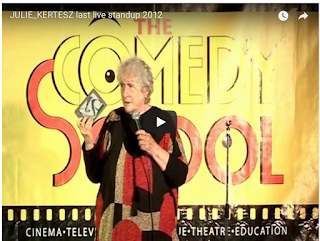 I read books, not enough. I tried in the toastmaster club, it worked, so so. I decided to give a try and went to a Standup Comedy workshop. (<---Link -->) I went back to a showcase, two years later as "guest comedian" Be aware, a Standup Comedy club is not "politically correct" for Toastmasters. And from the first workshop of 6 weeks 3 hours, two others as long followed, before I got out of my own. We have to go out, and I did only at 77 and went on to 77 comedy clubs. In my blog CompetentCommunicator.blogspot.co.uk/ there are many examples of my standups, most also explained why I think parts of them worked, even if most of them I just got as podcast, not many where taken also on video and with good light in plus.

We have to work to develop our funny boness! Humor is not something we "just do" if we want to get laugher after laugher and each time. Of course, not all audience laughs at every one of our bits, but if we work on them enough, eliminate those who are our dear kids but do not work, add new ones in middle to test, with time, we begin to "feel the audience" and have a good repertoire. But it is not learned with the first try!

So do now wait till we get the Humor Path: begin to work on your funny bones now, from the Icebreaker. What if they do not laugh? So what? Just go farther, and next time try same or perhaps a bit different. In comedy every word and the placement of every word is important. The length of pause, the intonation, the body language and movement, and in Pathways, almost every Path has a speech that can be given in "any style"! Why not dedicate, without waiting, one or two path to humorous style?
Posted by Julie Kertesz - me - moi - jk at 11:07