Once we did all that was needed and crossed all the "i" all tasks, projects and speeches done in a level, we signal it again to BaseCamp and to VPE, and the VPE or another Base Camp Manager (President or Secretary) approves it by a click, we get a Certificate of Level Completion to print, save or see. 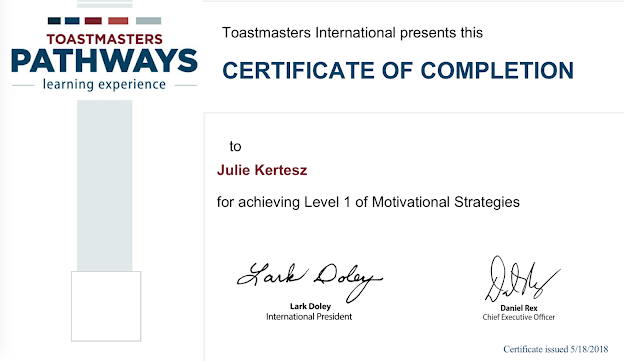 As you can see, I finished this at 18 May. Then I looked, not one of my clubs "needed" it. Told myself, "after end of June". Promptly forgot about it.

Then I got to this one a little later : only three more speeches later. 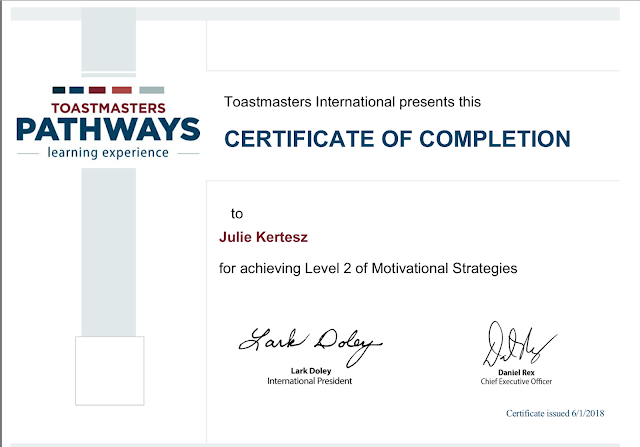 1st June date as I see, still before the 1st July date. Begun the Study and Give speeches from the Level 3 electives, while journaling about my emotional landscape.

Only yesterday, did I realize looking at my awards in Club Central, that not one of my Motivational Strategies Levels was yet "officially awarded to me".

Base Camp recognition is one, then an Officer from the Club I choose - as I have now 4 I am member of, has to "put it on in Club Central". They are separate.

I choose one of the clubs where I have given speeches but not awards for a while and wrote to them: "please acknowledge my Level 1". Was a bit surprised, as they asked me "when did you give your Icebreaker"? I remembered where I gave the speech and what I spoke about "It was yet  your best" the President told me - yes, I remembered this too. It was about how I came to the photography late in my life. "Your English is not good enough" I was told when I wanted to participate to a writer conference, in Paris, where I lived then. And one of them told me "why not go to a photography workshop: Paris discovery, instead?"

I went to the Easy-Speak, found the date I asked for the icebreaker from my London club. Then I remembered "I must have also a Certificate in the Base Camp"! And found indeed these two and each has a date of delivery.

It is for me, the first time I am asked some proof before putting my award to the Club Central. Each VPE and President has her own way of dealing with it. It is also the only club where I am not club officer. In the other three I am officer, in the committee with different roles.

As I asked only recognition of Level 1 (not level 2 also) from this club, now I will have to wait till they do it then only change the club to another, and ask the VPE of the second club to put on my Level 2. It is end August, almost normal I forgot the May or June awards, but should not have put them so far, if I was not all inside the Level 3 projects since beginning of June. 10 done so far, two more to go.

As usual, I have path at different level completions. Some path, Team Collaboration, still at Level 1, other Dynamic Leadership, at Level 5, but I put them also on hold, as I concentrated at the twelve Elective Projects of Motivational Strategies since three month. Perhaps, in one more month, it will be done, and I can take on some from other Paths. 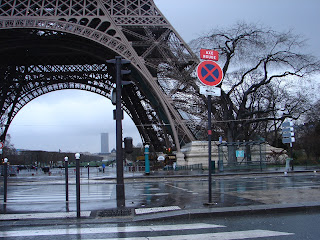 I decided, my French path, that I have begun to help the clubs as Pathways Guide, from afar, will be dedicated to Paris and my adventures in Paris discovery and life.

I was 30 years old when I went there the first time, and that first time is a sad memory. The important from it was that I survived but never forgot. Also important is that new, sunnier memories covered that first grey, rainy, hurting memory of long time ago.

Later, I come to live around Paris, and went "inside" from time to time, discovering it by bits.
Finally, I loved living inside Paris: I was almost 50 by that time. I lived "inside" 23 years, in a tiny flat on top of Butte Montmartre, then 7 in the suburbs in Argenteuil. From Argenteuil while living alone, after the discovery of Paris through a Photography workshop, I decided to take each of Paris 20 arrondissement one by one, and each week go with my camera to a part I did not know yet. That series of photos made me "known" around the world. Other photographers come to walk with me from time to time and asked me to show them parts of Paris. I will have enough photos for all my French path and lots of memories to take stories from.

But first, on to finish my Level 3 MS projects. Still three Projects to go, and neither are easy for me.
Posted by Julie Kertesz - me - moi - jk at 10:53