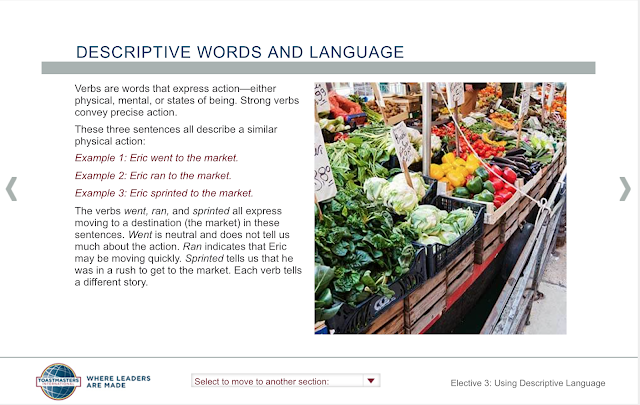 Using Descriptive Language complements a story we tell. That is a project I did not yet do in my previous paths, and it will be the 3rd elective in my Motivational Strategy path, Level 3. As I told before, but you know already I am sure, there are "Minimum 2" electives at level three, and this time I decided to do as many as I can from the 12. 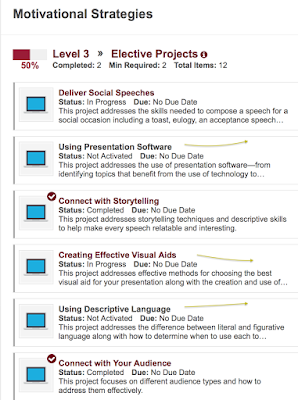 As you can see the two minimum have been already completed, Connect with Storytelling, last Saturday at Global Trainers Online was the second. Connect with your Audience was Wednesday in my London club.

I opened now the Using Descriptive Language the first time and read it so far twice. Not enough. There is so much material in it, and so many good advices. Examples, videos, even podcasts.

A whole huge box of treasures!

More I go, more I realize how much those with Printed Material miss. They do have "Deliver Social Speeches" and "Connect with Storytelling" in all their paths, but can not compliment it with "descriptive language" or "body movement" or "voice variety" much needed, even when hints are there still.

I also downloaded now The Descriptive Language Project, even if a lot is missing when one can not hear out of Base Camp the voice or see the video. And as you can see, decided even the next two other Projects I will take after this one, relative Visual Aids. 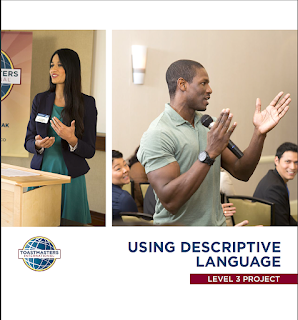 I believed, for almost a year, till I begun, that "Descriptive Language" is more or less what is the CC Project 4 and some of it is, indeed. But so much more!

First, as it is place (and no payment for extra pages unless I want to print, which I will when the ink I ordered arrives) so there are more examples of different languages, direct or symbolic. Of metaphors and similes too.

But in plus, I found a very strong advice to use stories to describe what we want to convey. Of course, it did not stop there.

It begins then to explain the elements important in a story and how to use them.
Most important, reminding us which those important elements are, and to use them. 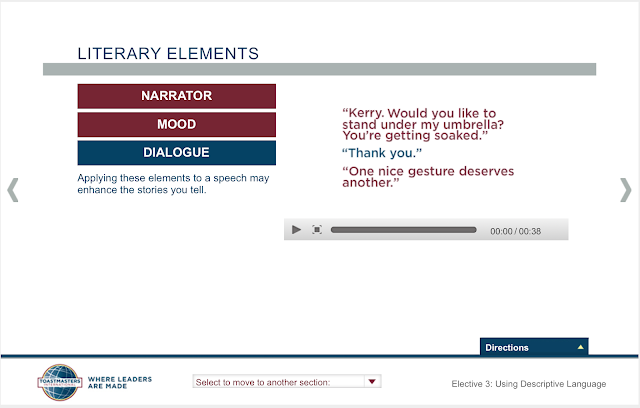 Consider, who is the narrator of the story? what is its overall mood? Add dialog for bigger impact with different kind of voices and vocabulary.  As you see above, with examples in podcast.

And who do you think is in the 2 minute video at the very beginning? Dananjaya video that we are asked to listen twice (at least), once as we "just listen" the second time we realize more how many different descriptive language is used together with the rose at the beginning of the word winning speech! And how fast it connects to us, the audience.

As if it were not enough, all this material, and all that the project ask us to do, we are given EXTRA Exercise ideas, "in addition to the assignment". To go farther.

It will take thus some time, to "do" this project if I really want to learn from it, not only for the assignment but for the interesting "plus" exercises suggested.

After I will finish, not yet for a while, here are the added two feedback suggestions to the usual Evaluation form. 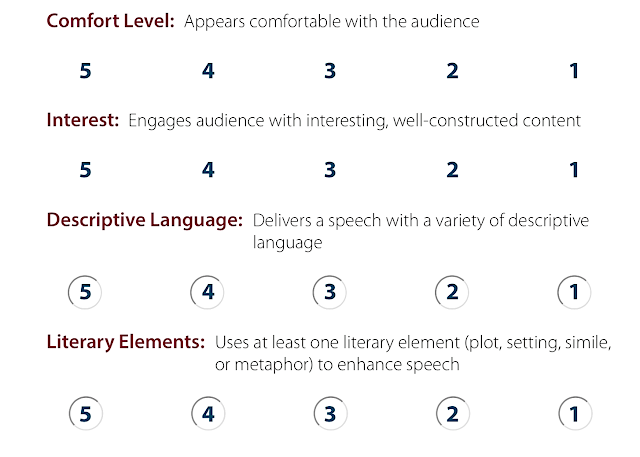 Beside the Descriptive Language variety, it also ask about the literary element or elements used to enhance to speech. At least one, it means if possible more of them. I also found interesting that here, it puts on the same level "setting" with metaphor. Plot with a use of simile. The important of course is first to be fully aware of them, then use them more and more often, without overuse of course.

As English is not my first or second language, when I was in CC in 2009, this project 4 was one of my less liked, more dreaded one. At that time, I was afraid of use of short words and phrases and use of dialog. I did, telling about getting out with my camera and asking permission to shot people. At the end the feedback was: "what was your meaning?" I lost my meaning thinking too hard "how I say it".

I am still pondering, what IS the best story that could go with this Project, but probably I will have to create and deliver more then once, till I will "get it". Already in some of my stories I was given the feedback "make it more descriptive". So, I have a lot to cover. Probably, I will begin doing the "plus" exercises suggested. They could give me a hint so instead of being lost in "how to say" I find the what then try to tell it in different ways.

This Project only the first "after the minimum elective" project, and already I am so happy I have decided to tackle the path thus, with activating, launching and looking at more electives. This time.

And who knows, perhaps next time, to get them better and better. Skills are not learned in one day, nor knowledge acquired only if we read a text, or listen once.
Posted by Julie Kertesz - me - moi - jk at 09:41