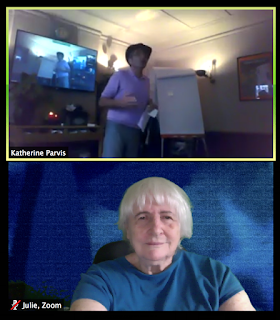 Beginning of the meeting in Paris, with leaders of Toastmaster clubs, "Speakers Corner".

After a rather difficult beginning, echos and so on, like in magic, with lots of talent, Katherine Parvis succeeded to make me assist to the meeting.

It was the first time she tried it, it seems to me, and it did work! I could hear and see them speaking and see them, and later myself and the screen I showed on the huge screen on the wall.

One day, I will learn the magic of it.

First, I understood that British humor does not work in France, not because I tried it, my time came later and mostly answering specific questions, but from the workshop leader. "Don't mock yourself in Paris! It does not work here. Any speech has to be adapted to the audiences. Here, use best the rule of three, etc." Good to know, and to try another time. When I will have speaking time (free speaking time), like yesterday.

Yesterday, I connected online, with Toastmasters from Scotland, Ireland.
As I was asking them TT Questions all begun to laugh! It was a pleasure to hear them laugh as I complained how many and different men ask me to connect "become their Facebook friends" and continue even after I tell them "but I am 85!" 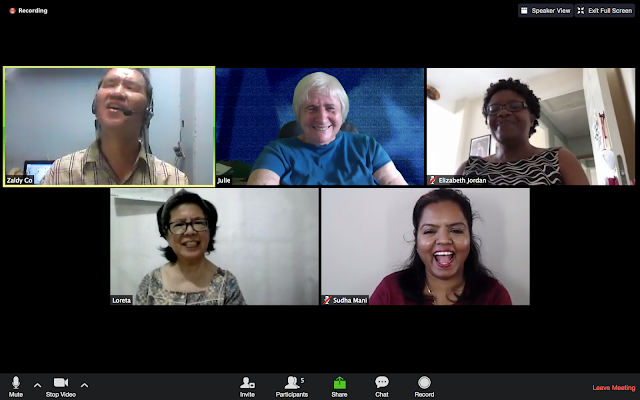 I did not intend to make all laugh but it was such a joy, that spontaneous laughter of all! And long too. "I was sad when I come to this meeting, but you made my day!" Sudha told me. She made mine with her laughter. And made others laugh too.

The meeting in Paris ended with a very interesting Pathways workshop organized by Katherine Parvis.
During the workshop about Pathways, she asked groups to form. Those who already tried it out, those who only heard about it, those... and so on. At the end each group presented proposition. Discussing how to help those who never tried and are afraid of Pathways; those who have problems, BCM, etc.

They got specific propositions, and what each groups need. Very good workshop, I succeeded to record part of it. Will have to work on it a little, the part where groups met off screen. When important decisions were reached.
The most important, it begun with laughter and finished with specific propositions from all.

I was asked, from a TM I did not see but heard very well, about the "how to have all the printed material" and I did explain that I did have that experience and do not recommend it to anyone.

Specifically in Paris "then you loose the choices of elective projects, you get two chosen for you instead of 13 to choose from" worked. Did not have even to add to it that with Printed Paths the VPE has more then three times more work! Has to approve and send to TMI the project completion for all 15 required project, instead just 5 times, approve by a simple click.

I did not get my story yet, humorous enough or short enough, but I will give soon again a 5-7 story about my adventure with Presentation Mastery path (parcours in French). How many dum decisions I made will best intentions, each time!

I got the first two manuals after more then two months, then the last one after two weeks that I finished my second level and my VPE and me signed it and send it to whom it had to. And when I finally got the most awaited Level 3 manual: only two of the 13 Elective projects where in it! In plus, even those projects where not "cleaned"! They were exact as the web based printed home, with reference to Projects I could not see!

I was so upset, that I gave away all three manuals - which I regret now again, as I can not even show them, to show that the difference is only the cover! In plus, with the web based path, I could print all the electives I wanted, and speak from any I have chosen. Not only the two I was given "by office".

Full week, almost finished. So much to think also!

We have all to find places to show where anyone can find some resources needed and help.

I got a very interesting and detailed letter today about the same problem from Coach Carole. And asked "do I want to collaborate?" Indeed, it would be interesting to Ask some questions then both of us answer our ways and publish the Q&A in both blogs.
Posted by Julie Kertesz - me - moi - jk at 13:26

The beginning of the Pathways Conversations in our Blogs. This has inspired me to consider how we can answer the frequent questions and others in a Table Topics format and do this in text and images in our respective blogs. Looking forward to this collaboration