Why not choose Printed Path? 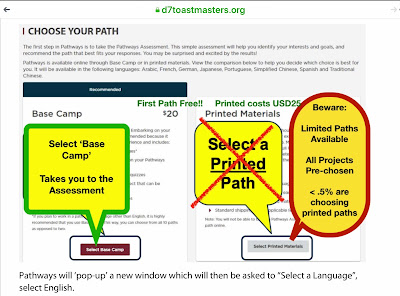 Do not choose Printed Path.

Not only because there are only two in languages other then English and only five paths in English.

Not only because VPE has more work to do as the Member is forbidden (I still not understand why) to access Basecamp.

For me, it was not only when I realised, « few electives » as written in the old Navigator, translated to none at all. Elective meant, I can choose, in Printed Material, ALL where Preselected by TMI for me. Yes, more then two years ago I have made the wrong decision to buy Presentation Mastery as Printed Path, and have the manuals printed for me, as my old printer did not print any more and I had to beg my family to print and come to bring me all material I needed, from my Visionary Communication Path and pdf of project descriptions and Navigator.

Let me not speak about the beginning, as it was Pilot district and first they send me CC and CL by mistake. It took weeks to prove that. Then finally I got the Level 1 and 2 in a fancy cover. As the Pathways did not yet launch in my region, I was proud to show them around.
It was only when the two next manuals arrived that the « milk spilled out ». First, because expecting all Level 3 Electives, I got only two, Storytelling which was one I should have chosen and Social Speeches which did not interest me.

I looked at the Mentoring Manual, still have it, then begun to read the Storytelling Project. With attention. That is when I realized that the text was not cleaned for Printed Manual. It was just the Web Project, and as thus, it recommended to go and read the Voice Variety and the Body language, with their videos, while if I where only on Printed Material no way I could have access to them.

That was what frustrated me enough to cast the Printed Manual aside and go buy myself the Presentation Mastery web based. So I am between the 0.4% who did buy. Some of them, did not regret it, others did regret enough to spread the word and dissuade others.

I already wrote three different times about this, but following a web discussion, decided to write again. If there is no computer or no hotspot to access web, what to do? Someone in club may print, or may send pdf to see on screen. And let the member choose his or her electives, and read all the available projects she or him wants.

As there are now some important improvements of user interface and soon others will come, for those who do access web - for their email or communications - with a bit of help at the beginning, in club or one to one, all may be get going on web based 11 paths.
Posted by Julie Kertesz - me - moi - jk at 19:46