First Vic Lindal created a mind map
and then outlined his speech on the Pathways form
This mind map begins with the 30 years ago... 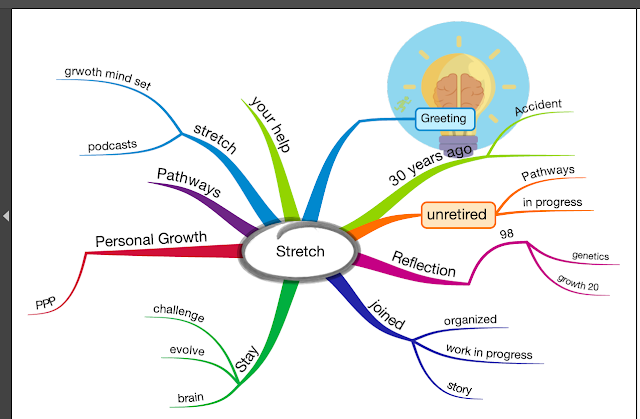 There were many points very interesting, I retained most the "unretired" and how Pathways lets us feel alive again. It was as if he spoke about me too.

Vic Lindal spoke at Royal Roads from Victoria, Vancouver Islands, we come to listen from different parts of the world. Me from London, Magda from New Zealand, William from Florida, Krishn from Mauritius, and some even from not far where he lives.

He created a second mind-map for his delivery, I did not add it here as it is too stuffed for this small space to read well and understand. I still did not try this method of creating a speech. Pathways may not come yet to him, but he already begun!

Royal Roads Toastmasters will roll out in March in Canada
but the Icebreaker already delivered!

The Royal Roads Toastmasters president Brian Dodd is already far in his Pathways Paths, he begun at the same time and place as I did. At the end, he was even President of that club in Virginia we joined the same time - with members we never did see, only heard.

Seeing, is so much better! Even so, we felt welcomed, and because their visitors, they finished President Distinguished and will be again this year. How you welcome Toastmasters coming in Remote through web is very important. Next week I will speak about it telling the story of my different clubs and experiences.

I have indeed, a lot of experience by now. When does an experience becomes Expertise? Again, someone tried to put me down on Facebook discussion and told me "you may have experience but not be an expert".

Strange, it reminded me the times when I found out my husband cheated on me. I asked myself, after seven years with him was my "expertise" not good enough? I had, at time, no other comparison. Have hoped to be with only one in my life. Was I a bad lover? Is my "experience" in Pathways not enough? I begin to have quite a lot, and bring many who hear me (or read) to begin listening to my enthusiasm.

Brian begun, then Vic listening to my last week speech declared "me too!" And prepared and gave this Ice-Breaker. How would you Evaluate it? What is your reaction to it?

Tomorrow, a tale and a "moral of a story" about projects validation in base camp.
Posted by Julie Kertesz - me - moi - jk at 08:30

You continue to get better
Vic

With good communication beforehand, these issues could have been addressed. The onus is on the speaker to make sure that whatever the structure is, that it is clear.