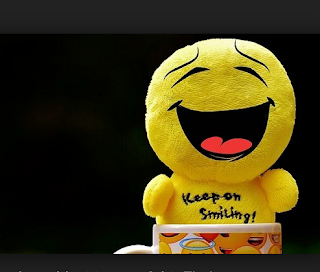 Every path has three to four specific Project. I wonder what can be in the new path that will be arriving, it seems the 5 February, for the Chinese New Year.

I decided to study Humor, Comedy, Standup end 2010 and spend almost all my year 2011 for learning more.

My first Comedy Workshop took 6 Sunday afternoons at the Comedy School, finishing with "graduation performance" before 120 at the Pirate Castle. With 9 boys beside me, who called themselves man, but misbehaved like adolescents, I did finally well, because I learned with Toastmasters 2 years by then and with Spark London Storytellers podium and audience presence.

And read lots of books. Here are just a few of them. 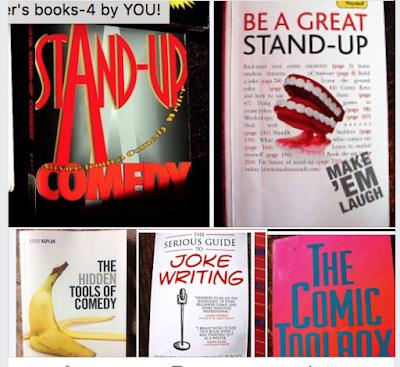 Judy Carter wrote the first Stand-up Comedy book, and later, I went to Las Vegas to her joint Standup comedy workshop held with Darren Lacroix. It was the gift I offered myself for stepping into my 80 year, at my 79 birthday.

Be a Great Stand-up, decided me to go to Logan Murray workshop, in London, my second workshop, also 6 weeks 4 hours each time. I learned from him how to held a great workshop where all work together and to look around the world with Comedian's eyes.

My third workshop, with a great toastmaster, David Jones, propelled me finally out towards 20 comedy performances, we promised him. Of course, after 20 I could not stop. Some others stopped after one or two, not enough. 6x4 hours.

I begun to learn about humor and standup when I was 76 year old, till then I was convinced I can not. Before, if people laughed, it was by chance mostly, after, it was a lot of work, writing writing, trying out in 77 plus comedy clubs. Succeeding to make them laugh a few times in 5 minutes, and sometimes 36 times toward the middle. Longer, stronger, towards the end. 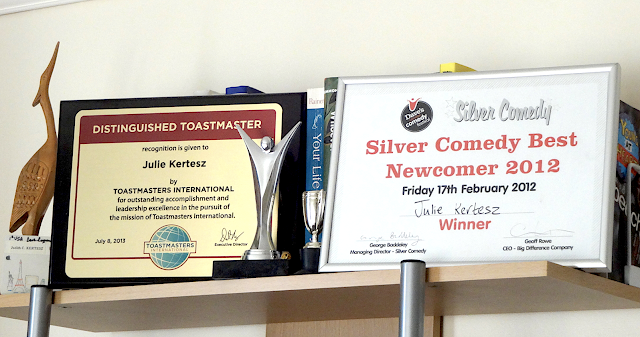 `Both the DTM plaque in 2013, and the 2012 Silver Comedy Best Newcomer 2012 winner gave me the same joy, for one of them I worked from 2009 January, four and half year, for the other, "only a year" but a very busy one. How can be that we are expected to learn a skill with a Project or three, and a few speeches? I am very curious, what the new path reserves us.

Of course, I will buy it as soon as it comes out! Never too late to learn more.