Tomorrow is another day

It is minor op, I know, it is only tomorrow, I know, but difficult to think of something else this morning.

I thought to tell you. Finishing level 1 of Visionary Communication, I was proud. Arriving in level 5 no more. I am mostly preoccupied how I go on now. The light begins to simmer, but will not be easy. 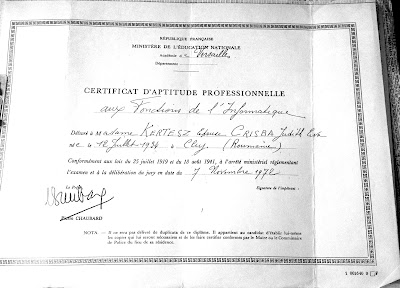 Also, have to tell you that I was less "proud and happy" of myself when I got a late PhD in 1977, then with this certificate, which is apprentice level computer proficiency, gotten a few years earlier.

Because it was my first French diploma, showing me I can study and give exams also in French.

It was after a year long correspondence course about computer languages. We never got to put our hands on any computer! Just had to write on paper. Fortran and Cobol mostly.

Imagine my joy, when the first time I did touch a computer through a terminal in Washington DC, and then even more when a few years only later, I begun to work on an Apple II. With my second program, I got one Apple II in my house! That was a joy to play with, program, try out others programs too. A bit later, I got even a printer near it. Each advance in our life is a joy.

That we can do it. That we did it. That we can now play also not only work. For me, playing never meant computer games, but making some programs, later meant correcting some images on screen. Then telling some stories from my life.
Posted by Julie Kertesz - me - moi - jk at 06:41