As I begun offering interactive presentations, day after day, I begun to understand all that is still to let know. I did write about the 10 Required projects, from which 3 projects only are the those that are Specific to a path and differentiate them. It does not seem a lot, but they do make a huge difference! 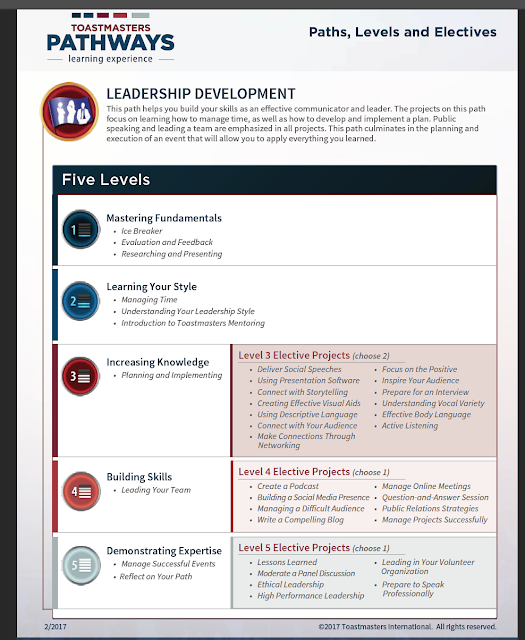 I did write in detail how to choose a path, how to avoid were we do not want to go and choose those we need first. But look at this picture.

In left,those ten required. At right all the "Elective Projects". I did publish them level by level: same in each path.

Twenty seven elective projects available to us in a path.

That is what I do not think it was not written clear and I realized by me either. While we do have to choose, to pass a Level, only 2 Electives at Level 3 and 1 each at the next Levels, we got all the Projects (online) that we can Activate one by one, read them. Then we can Save, Print, Export in PDF format any of them. All 27 of them! not only four of them!

In my first path I did Activate, read and saved 20 Electives and 10 Required and printed many of them - some I did not yet "done" even by now a year later. Later, I opened less, because I had them already available in my computer. Beside those specific for the path, I did open a few that I did not before. They were waiting, patiently.

So, as they are same from path to path, next time we already have them at our fingertips. We can use them any time (after we arrived at that level) from then on.

I did not realize so clearly, within one path, we do get already 37 books or manuals! Is a project a manual? It looks like one at least. For the first two levels, we could put together three by three. From then on, it is difficult. 13 Elective projects would make a thick one - even if that was what I was hoping to get in my Level 3 Printed manual! (I got only 3 projects in all.

Building skills takes even longer then Increasing Knowledge, and both take time and repetition if fact, that is why they arrive almost same again and again in every path. Demonstrating Expertise needs a team, needs time allotted to do it, and again, doing it once is not enough to really become experts! We have to begun to get there, take the first step to learn knowledge and skills by ourselves too.
Posted by Julie Kertesz - me - moi - jk at 11:14