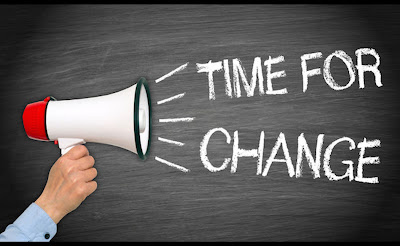 Of course, our life is in constant change. We love it and hate it too.

It is time for changes in all our Toastmasters clubs at the end of June. New president begins his or her work and a new committee is voted. It was voted in Lewisham Speakers.

I will be Secretary from July in London beside Pathways Ambassador in my Area, and it was voted in my main online club Witty Storytellers: we will have a new president. I will be VP Education for another year.

Where is the change?

That is my task to announce soon, at our next meeting. Required project of level 4 of my Visionary Communication track : announce a change.

I have a lot of changes in mind, from all I have learned in our first year in the first 100% online Speciality club, "all about Storytelling". Now, we begin to mature and also the membership changed, we are ready to go to another level.

A few Toastmasters told me "you go so fast" on your Pathways journey! Do I?
I have three advantages. I am old. I am retired. I have a lot of time. This is the first one.

The second wonderful advantage is that I am member in different Online clubs and can go to others: they all welcome me and my speeches and help them with tasks.

First was Netizen, I joined after I broke my leg, discovered them through Linkedin three years ago. From it a group formed Firebirds a few month later breaking out creating some club as they believed in. I visited once Netizens since. I become Firebirds member when it was born, and was the first to offer them a Storytelling Workshop a month later. I am still member. They are now the club with the biggest number of members.

I have a meeting with them, soon today.

Toastmasters International Board decided, they will allow officially 100% online clubs, last year and both clubs fast chartered end March 2016. Firebirds Collective was already meeting by then, week after week, for a year!

Pioneers are just that. Break ground. Advocate new things and also prove that it works. It does work very well. Firebirds one important goal become to beget new clubs and it did more then one.

"My" Witty Storytellers Online is the first one that chartered from those clubs with 25 members, then Great White North (around Canada), and later Toastmasters without Borders (Mostly Australia and New Zealand).

While initially I imagined Witty Storytellers mostly in Europe, the Storytelling attracted members from all over the world. From East, we have member from Hong Kong, Korea, Mumbai, Mali and Manilla, at West from near Vancouver in Canada, Oregon and California in USA, and east coast from Florida, Virginia and New York. In Europe, from United Kingdom not only from London (where I live) and farther from Germany, Hungary, Finland. Going south from Dubai and Jordan and Beirut. And I forgot Uzbekistan...

What is wonderful is that through all our different cultures, we realised very fast telling our personal stories that we are in fact so alike each other! There is a lot more that united us and make us friends!

What is difficult is to balance time zones. No problem that in one place is fall when in other is spring, or  that some countries do have only raining and less raining seasons. The problem comes with the time. When it is 6 am in London, Thursday it is still 10 pm evening in California, and already afternoon in Hong Kong. Strangely, I found more easy to meet with those far away then near. Because in Europe where only one or two hours difference, some have to go to work already!

Personal stories help so much to fill the gap between people and communicate.

From Witty Storytellers, and many of us belong to two online clubs, at least, already one club was born and one more will soon from our online club. We help and cultivate those "pre-charter" clubs, visit and contribute to their grows.

We are a small community of Online clubs for the moment, but very tight and friendly. And one that grows very fast as we all discover new territories.

Combine this for something else new, Pathways Education Program.

We are used to go online, and beside the 100% online clubs we can visit, we are also welcomed to those who meet in one place but begun to welcome those from outside. Yes, that is how I found already two clubs in a district that is already on Pathways, and could begin my journey.