Leave a footprint, huge or small 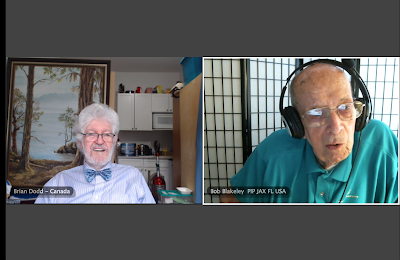 Yesterday, at my regular Sunday meeting, our incoming president gave us a power point presentation.

The interesting pictures (see one bellow) where those of foot prints.

We can remember images.

We can remember a metaphor.

We can remember and connect to what he was saying, about "moments of truth" to think about our club.

And one of the footprint I had time to capture, I will add here. The other where small foot prints in sand. Also very important, he said, to take small steps toward what we want to go.  Passed too fast. 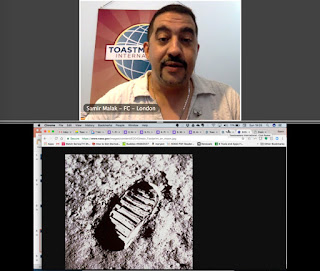 Here is Samir, also from London as me, even if both of us arrived from very different places. And his picture of a huge foot print.

Are you asking me why did I add the first picture? It is about one of Firebirds Collective active members, Bob (Robert) Blakeley, TMI President in the years where they found a way, to get women inside the Toastmasters clubs. One club at a time, one woman at a time, in 1975 / 1976. A huge important impact he left us!

He is also a great evaluator, was yesterday.

Of course, now we are almost as many (or more) women then men, but when I went the first time ever to a Toastmasters club, in Silver Spring, Maryland, "1000 feet aways from the Washington monument",  I went because they just opened to women. So? They were many men. And I have been single now a single parent with two adolescent kids, for more then 2 years! It begin to feel enough.

There were not many places to meet in Paris, but as I arrived in 1977 July in Washington DC, I found out to my utter delight that so many place and pretext to meet! Folk dance, poems reading, pool parties, and even single parent meetings! As I chose what would interest me anyway, more and more I found myself speaking with other, interesting women. We were too many women everywhere.

In a piano bar, as I chatted with a younger woman, original from DC, she told me "Julie, you should go to this club named Toastmasters, there are a few around here. They are interesting, intelligent, and have very few women, yet."

The first club, did not stick, my daughter had classes I had to take her that day. The second one, Monument Toastmasters, meeting at dinner under an Italian Restaurant (they still do) did. They were indeed, interesting, and they were intelligent too. I was only the second woman between 22 members. Alas, they were also great husbands, well married! Till I found out that, I already was hooked on learning to speak better in public, understand the ropes, look into eye, listen better.

And you know what? With those skills, outside the Monument club (I did finish my 15 project CC there in the next three years), I did find what I was looking for.

As for the path, you never know what unexpected delights you will find on the way. And as Samir, told us yesterday, you can make also small steps at a time. You will never know all the benefits that can come from that small step.