First glimpse to other side of the mirror

The other side of the mirror for a Pathways user, are the "Base Camp Managers"
For each club, those are:
Usually, it will be the VPE who does approve as each level passes and puts that also in TMI as usual, noting the speech title and date, as with "legacy program". I just heard how CC or the Advanced manuals are already called by some! I love it in fact: "legacy". The President and the Secretary are there to help so that no one waits when finished a level to be accepted, if VPEducation can not for a reason.

The New Toastmasters, that join a district or region already on Pathways program rolled out, will have to go straight into Pathways, they do not get CC manual nor choice, but those who are already on the programs, can decide how long they want to stay, as they are, or combine continuing on the old 'legacy' ways parallel with beginning Pathways too, so they could help the newcomers and get a taste. They will be able to do it for two years after all the regions had finished getting Pathways. 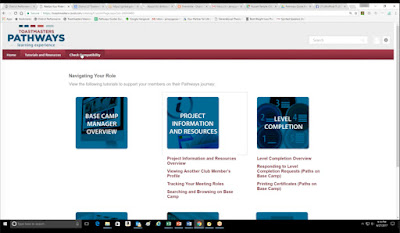 Tonight, I went to sleep early and in middle of night got up. From 1 am to 2:30 am I listened to superb presentation from Jenny Genser, with Alonzo White. At the end, even learned that he is her fiancé!

Jenny is a Pathways Guide. A Guide helps many clubs "Base Camp Managers" and, as I have seen, also those who are already on Pathways but are a bit lost.

There are new features in Pathways now, or old features I did not realise they were there!
Jenny discovered so much more about Pathways program and how to use different features then me. Perhaps also, the Pathways team added some of them while I did not pay attention.

While it is too late now for me to write all I have learned as it is 3 am at night here. I also need to experience it, try it out, learn it before I could speak about. As to going to see the other side of the mirror, I'll have to wait till 1st July, when I am officially Secretary and become a Base Camp Manager myself.

Being able to help using GoToMeeting online platform is a huge encouragement to me. It means, I could try without going from club to club, if I am named a Guide in my London District later. And perhaps even as Ambassador, which I already am.

The most interesting question was from two Toastmasters who just finished CC and CL: what is the difference? I will have to answer that question in another post. The short answer: there is a lot more to learn that we can apply to our everyday work and life, faster then before.
Posted by Julie Kertesz - me - moi - jk at 03:13

I would have loved to have attended. As a Base Camp Manager already I am eager to learn more. Was the session recorded? If there are other Base Camp Managers out there, I could start a Zoom session and we could teach ourselves by doing.