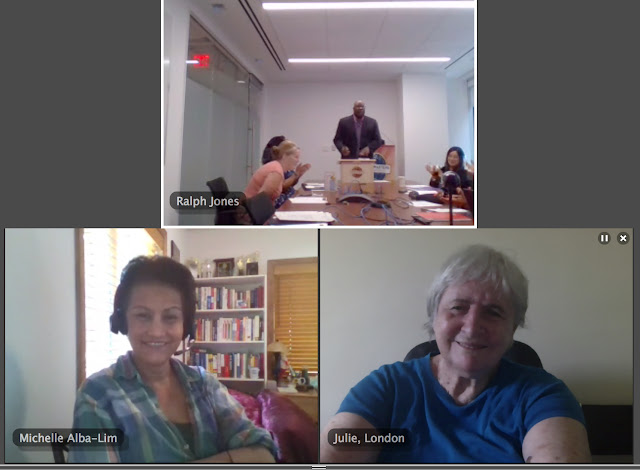 Wednesday and Thursday, I experienced three different toastmasters club meeting, one after the other.
They could not have been more different in form, but they were all similar in spirit!

First, I participated remote to a meeting in USA (Arlington). MBC Speak-EZ meet at noon at  their work. It is 5 pm here in London, early morning in Oregon. They specially acquired a GoToMeeting platform, so we could attend easy remote to their meeting. 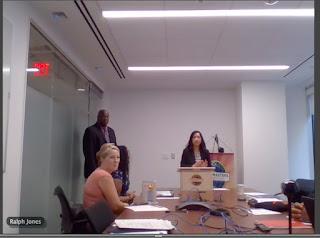 In my opinion this kind of MIXED or Hybrid meeting, some members on place, others coming in remote, is the most difficult to organize. One has to see, hear the most possible and even, "feel together". At least they need a Screen to see the remote incomers, a Mic strong enough to hear all in place and a camera to film them.

It was a great meeting and I enjoyed it a lot. I told a few stories specific for that audience. Michelle come in from Oregon, me from London, they where in Virginia. They are already "on" Pathways, even if not all yet.

Second meeting. Almost immediately after, only one hour after hybrid meeting finished, I was taken with his car, by the future VPE of Lewisham Speakers, London. Not to far from where I live. 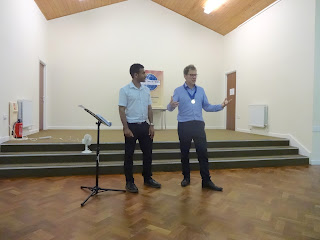 This time to a club, on online we call Brick and Mortar club, or a walk-in, the place we meet now is really Brick building and easy access. The club where I go for more then 7 years now, but this is my thirds place used so far the best and we stay.

We are all there. Or suppose to be. We were not many today, but we had a wonderful meeting.

Today, we changed presidents. And, at the end of the meeting three toastmasters finished their number ten, in CC: an inspirational meeting!

Even with two doors were open, it was really very warm. Only towards 10 pm when we finished, did a small breeze come in.

I evaluated a great inspiration speech, Pattricia's, that begun with a story all could relate to. In plus answered a Table Topics question and in the break, we dit chat, a new member asked me "how you got your confidence"?  After 200+ speeches, it is normal, I answered. But it was the wrong answer. I have to explain her how she can do it now! Being in the moment, feeling as she is already with friends, what else? I will explain next time, that we were all afraid at the beginning. 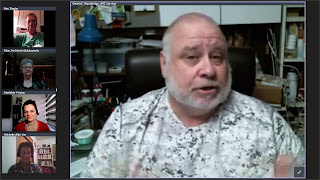 Got to bed at midnight (usually I sleep already at 9 pm) and then at 5:30 am begun my 100% online meeting (the last of the month and toastmaster period): Witty storytellers Online.

Dennis told us the most inspiring story relating us what he and his father got through 11 September 2011 in New York and how he admiring the young unsung heroes, the young men helping others to breath.

In my speech about Change, next, I was happy to be able to remember how we begun a year ago, with all who helped the dream come true. Where we are now, with new full of energy members coming in, and where we are going. Some of the changes we could make for the future to blend better together new and old members. We begun meeting a year ago. 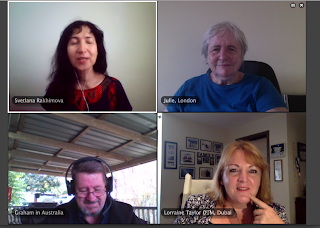 Pathways, did not invent everything of course. My task was to "Communicating Change." Different views of the same meeting, a little later.

"We need to change, so nothing changes, or nothing should change in order all could change?"A great Rumanian play writer, Caragiale, put it into a political character mouth - almost 100 years ago. The only one remaining same is me, as VPE - because I feel still the need to make still some changes in our meetings and agenda.

Of course, we all change, the world around us change, but are we prepared to it? How to help for all the necessary transitions that some hail, others fear?

Lately, I read a lot about that subject. I have to stop for the moment because we change committee roles, we have new officers. But we are also going towards the Pathways Education Program.
Posted by Julie Kertesz - me - moi - jk at 04:23