This is from my Toastmasters International "Additional Roles". The dates are those of beginnings. 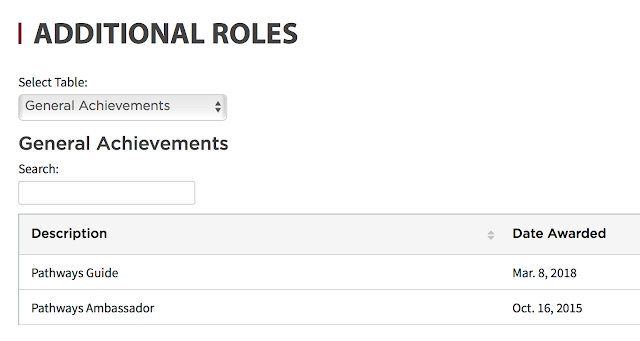 I was anxious, as the Pathways Ambassador (before it was REP Ambassador) role was dated Oct. 16, 2015 - as it still is inside my "Welcome Julie" on Toastmasters International "Additional Roles", as the Pathways Guide role is also from the date we begun.

But yesterday, I received a letter.

This is only part of the letter, but all the letter reassures me: I did receive the 17th July this year, the Pathways Ambassador credit, equivalent with a year District Officer credit, even if the date is not there. 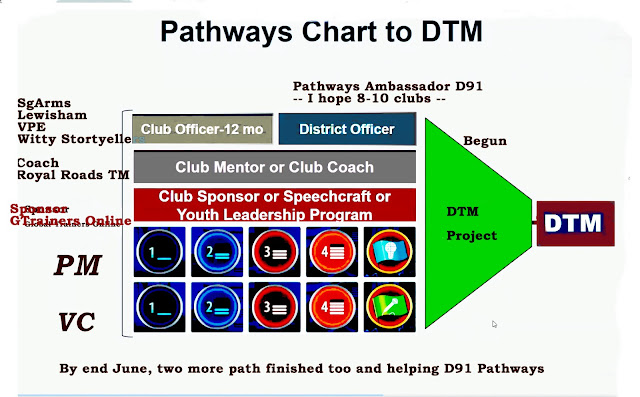 In fact, I did perform also a district officer role, I was Division Governor, but that one was not recognized after I broke my leg, even if I did my role well.

Now I did get Ambassador in District 91 (district not written) and Guide in District U (un-districted clubs) - for the last one I will be giving my last virtual Support Session tomorrow early morning and another early afternoon London time.

I have been Club Officer, Secretary and VPE in two clubs more then a year already. District officer role is considered the Pathways Ambassador role. I got my Club Coach certificate a week ago, and have been Club Sponsor to a new online club. Finished 2 path a while ago.

The only thing remaining now is now my D.T.M Project, for which I do already have my team, that agreed to work with me. Perhaps one more in the team will be needed to help. I got my Project finally, only have to give my first speech after I meet at least once with my team. All this was achieved, in fact from January 2017, "inside Pathways period", wether or not on the new D.T.M will be written or not "Pathways D.T.M".

I can concentrate from now on, all my energy on the D.T.M Project.

Of course, not "all" as I am also to finish my work as Guide (soon) and I am President of an online club and on two other club committees. I am doing three paths at different levels, now slower, Projects one by one.

Yesterday evening at my land toastmasters club, the Table Topics Master asked each a question about what they want to achieve if they live to 80, what they will do at 80, how they will behave at 80. What, 80 years old? That was for me five years ago.
Posted by Julie Kertesz - me - moi - jk at 05:30