Here are my lasts Education Awards and the clubs who declared them to Club Central. 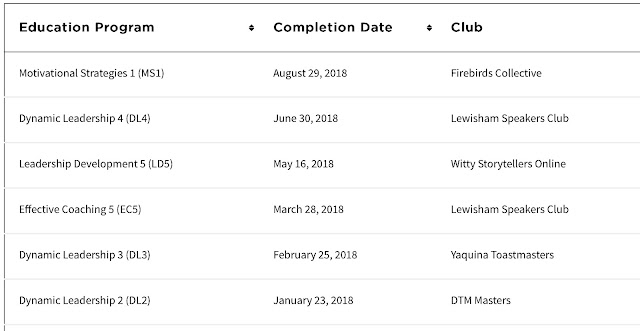 In January, Level 2 to D.T.M Masters and in February, Level 3 of Dynamic Leadership to Yaquina Toastmasters. Then, as soon as Pathways launched in D91, Effective Coaching Level 5 (Proficient) offered to Lewisham Speakers Club, from London, and as soon as Pathways Launched online, Leadership Development level 5 (proficient) to Witty Storytellers Online, in May. Before end of Toastmasters period I was asked to offer one more point to Lewisham Speakers, so they got Dynamic Leadership Level 4. I did not yet finish the level 5.

Motivational Strategies Level 1 offered to Firebirds Collective, who had my last award in 2016 December, just before I begun Pathways, and the Level 2 will come from Lewisham, I am waiting the VPE or President to figure out how to declare it to Club Central.

As you see, they are "my" paths, not any club's path as some still believe. The paths we chosen are ours, member's path and do not belong to a club. While declaring them fast in Base Camp is important so we can go on to the next level, and only a BC manager can approve them, declaring the award in TMI is separate and any Club Officer (but us) can do it, at any time. Faster, or later. But it is OUR choice which club and when, if we have more then one club.

As for now, I still have four clubs I belong officially, and possible will to two more soon, if they need me at chartering. As with the Paths, for me it is worth to discover more clubs and more paths, of course the path costing a lot less then even a six month membership in club.

I got my Club Mentor Award, waiting to get my Pathways Ambassador Award. And of course, later, my Pathways Guide and Ambassador Award for another district (online). You see the Guide Tasks as a "curriculum" there is a lot in it, and I finished in fact all, but did not want to declare it closed, till I am over the last, 15th Virtual Support Session, to help Base Camp Managers and First Adapters in my allocated clubs with their Pathways questions.

There is a lot behind me already four path finished, but what is really interesting to me are the projects before me, and the paths that are just at the beginning. Doing each differently.
Posted by Julie Kertesz - me - moi - jk at 08:48