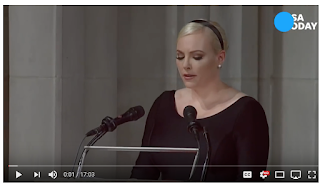 On the line of my education to Social Speeches, one kind of speech I missed for me, till yesterday Eulogy. 2 ½ hour long in Washington National Cathedral, for John McCain funeral, two former Presidents, Obama and Bush, Meghan, one of his Daughters, one of his best Friend, Jo Lieberman, Kissinger... I learned a lot.

Here bellow is Meghan McCain's full eulogy of her father. She was the first to speak.

Even in an Eulogy, personal stories and humor work! 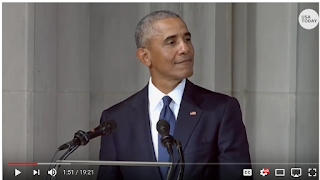 The beginning of Obama's speech seemed almost like a Roaster, with lots of laughter, even from McCain's wife and all the mourners.

I wrote down in my notebook each time he made all audience laugh, mostly the first 8 minutes in his speech, that later become more story and political. Great speech to listen also.

It is worth to listen also to his friend, Jo Friedman's Eulogy, again has stories and humor in it. And I was told, McCain arranged many of his funeral, this last months, inviting the two presidents, personally.

I added the pictures because the video's picture does not show up in my blog before opening the post.

I decided, to find other kind of social stories, birthdays, toasts, giving and receiving awards online, even if "officially" I finished the Social Stories Project. As for the next one, my "find the positive" journaling, I realized that looking to the negative and troubles I got into, gives me great stories and laughter too. Tomorrow, more about that.
Posted by Julie Kertesz - me - moi - jk at 11:26