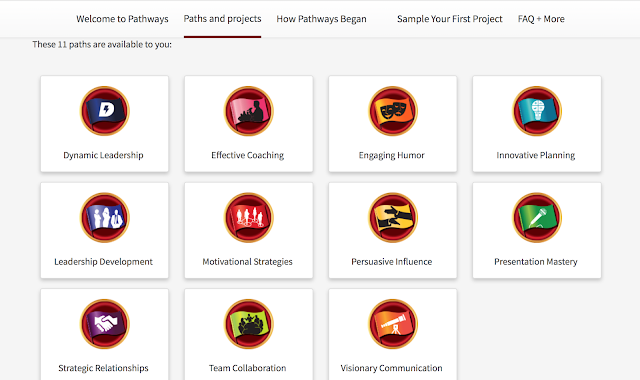 Here are all 11 paths and their symbols and names. Initials, DL, EC, EH, IP, LD, MS, PI, PM, SR, TC, and VC. Some of them I finished, others are already between my paths. I think, I will never try IP nor PI as planning is not my thing. Some districts did not refresh and show still only ten paths.

I am now waiting to see what will be the 12th path coming in the remaining place.

Yes, many begun PI or IP because it was offered often as first choice ! But not many have finished it. And here is the beginning of a stat from George Marshal, about how many Level 5 achieved by districts, how many members in the district, when the Pathways rolled out in them. 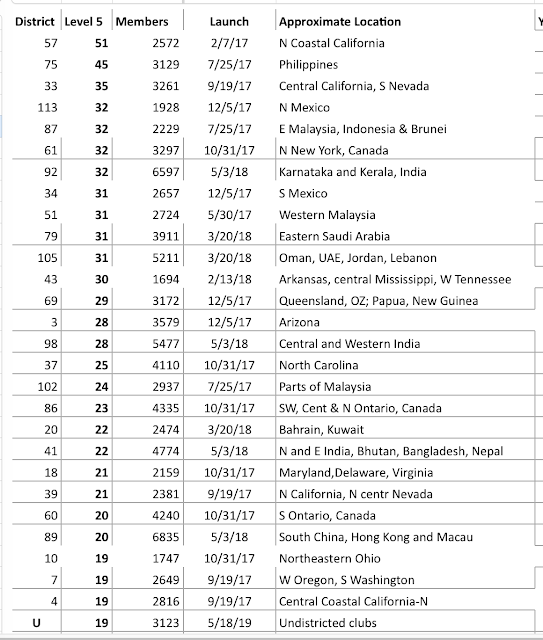 The first 6 rolled out early, have the highest number of Level 5 - that is what we get, and TMI does not distinguish between Pathways or traditional DTM. But after the 6, there are those with 31 each, in "far away countries" and some rolled out only last year! At the bottom here, I wanted to show those last rolled out, at 19 Level 5s same number as Oregon, Ohio rolled out more then a year before!

Besides, in the Online community, many of us are Dual, and we did give Level 5 awards to others then the online club too. I for one, have a Number five in none less then 5 different districts, clubs.

In fact, it does not matter how fast we progress, the important is to enjoy and learn on our path!
Posted by Julie Kertesz - me - moi - jk at 08:47