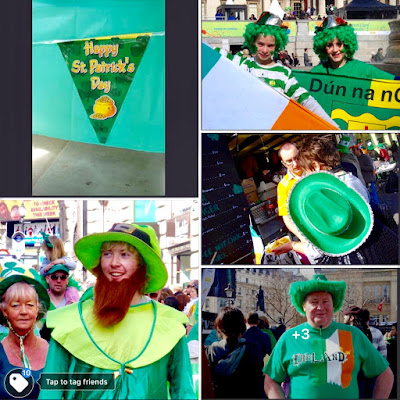 Ten years ago, I went the first time in my life to celebrate with the Irish and their descendants, their new immigrants even, young ald Old, Saint Patrick’s day. By taking photos and publishing them on Flickr.

It was my first spring in London.

Two years later, from photography to Toastmasters, to personal storytelling I arrived to the Comedy school, for six Sunday afternoon.

Found myself between ten young men behaving like nasty boys. Almost quit, but I paid already.

Saint Patrick forgotten I waited long for the bus that did not come, because of the Parade. Finally, took the metro and then walked through a long long street, my knee aching more and more. And in my mind, the routine formed. As soon as I arrived, yes, late, I was asked if I still want to tell my three minutes. Well, I told them how I felt. In their own language!

It become my comedy Icebreaker!

For the first time, very surprised, all laughed. And our workshop leader, told me : “I fucking love your shit!” Another lesson, how many ways those two words can be said.

Slowly, I added to it. And sometimes I shuffle around the order in the parts, but mostly the same texts are told and with more and more success. Small new parts added in the middle testing their effectiveness and left or dropped. Trial and error, trial and success is how the routine is becoming longer. More effective. Sharper. Funnier, for certain audience.

Saint Patrick day, remains a sweet memory for me. The waiting for bus, the walking with my knee hurting more and more paid. “The obstacle is the way” so true! The first time, I break the ice between me and those ten young and made them laugh. Made them see me also with somewhat different eyes.
Posted by Julie Kertesz - me - moi - jk at 07:43